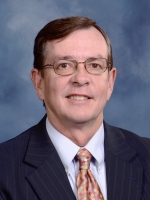 Dr. Louis A.B. Venable, Jr. has a passion to “preach The Word” and has been invited to lead revivals all over Virginia, North Carolina, and South Carolina. He is very active in local, state, and national events, having spoken at several State Convention events, and was a guest preacher at the 2001 Southern Baptist Convention Pastor’s Conference in New Orleans. Since becoming the Senior Pastor in 2015, he has helped Loris First Baptist Church experience significant numerical and spiritual growth, in addition to leading his faithful “church family” to participate on mission trips to help churches, church planters, and missionaries in South Carolina, Arkansas, Virginia, North Carolina, Georgia, Israel, Argentina, and India.

Pastor Louis was born November 20, 1962 in Sweetwater, Tennessee. His father served over 25 years in the military (Army and Marine Corps), so Louis’ family moved many times when he was young; however, Louis spent most of his life in Charleston, South Carolina. After graduating from The Citadel, The Military College of South Carolina, with a Physics Degree in 1983, Louis served as an officer in the United States Navy for ten years and then as a process engineer and production supervisor in paper mills for seven years. Louis was working for Union Camp Corp. in Franklin, Virginia and was a Sunday School teacher at Black Creek Baptist Church in 1994 when God called him to preach the gospel and revitalize churches. While serving in full time ministry, Louis earned his Masters and Doctor of Pastoral Theology by taking classes from Southeastern Baptist and Andersonville Theological Seminaries.

Louis has been married to the former Ruth Anne Vargo of Charleston, South Carolina since 1989. They are the proud parents of three children: Lauren; Lindsay; and Luke.